Connectedness – An Incomplete Encyclopedia of the Anthropocene 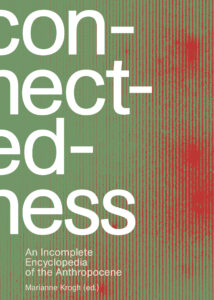 PhD Fellow Sofie Isager Ahl has contributed to the anthology ‘Connectedness - An Incomplete Encyclopedia of the Anthropocene’ published by Strandberg Publishing.

The anthology, edited by Marianne Krogh, considers the totality of issues surrounding the ‘Anthropocene’, the geologic era characterised by humanity’s vast impact on the Earth.

The anthology is a so-called incomplete encyclopaedia, which does not claim to draw an accurate, complete picture of a changing planet, but instead views the anthropocene from several positions and based on different disciplines. The book attempts to capture the most important positions in the debate by asking the over-arching questions: How do we live together? And who are we when we are not only human but also nature?

Sofie Isager Ahl's contribution is called ‘Agriculture’ and is about regenerative agriculture, which actively seeks to improve and strengthen the health and vitality of farm soil.

The book can be purchased directly from Strandberg Publishing.