Foreword to ‘The unknown aspects of opium’ 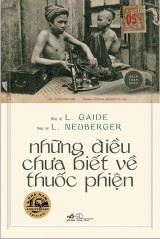 In Vietnamese, the original French title has been slightly adjusted to ‘The unknown aspects of opium’ (Những Điều Chưa Biết Về Thuốc Phiện).

In the foreword, Salemink offers a critical history of opium in colonial and neocolonial adventures and rule – including during the Vietnam War – and puts the original treatise written in a colonial context into a modern perspective.