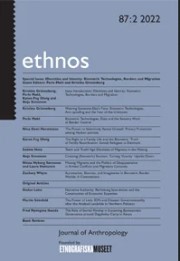 The special issue illuminates how biometric technologies are put to use and experienced by the diverse social actors who imagine and promote, develop and employ are subjected to and attempt to circumvent such identifications.

The special issue includes situated ethnographic fieldwork among tech-developers, border police forensics, IT hacktivists and migrants, and in their introduction, the editors present biometric identification as a relatively new area of investigation that has been subjected to little ethnographic scrutiny. They also argue that, while biometric technologies are promoted as enabling objective and incontestable Identifications of individuals, they are in practice embedded in specific social contexts, fraught with ambiguity and uncertainty, and depend on substantial human interpretation and social identification.

In addition to their joint introduction, each has contributed with an article:

The issue has been published in Volume 87, issue 2 of Ethnos. Journal of Anthropology.