A new anthology on the cashless society examines the strategies adopted by different people when traditional coins and banknotes rapidly disappear from their daily economic exchanges. Six researchers from or affiliated with the Department of Anthropology have contributed to the volume.

The cashless society is expanding as credit cards, cryptocurrencies, online payments and other digital forms of payment replace traditional coins and banknotes. How do such modes of cashlessness impact, transform and challenge the everyday lives and livelihoods of local communities? 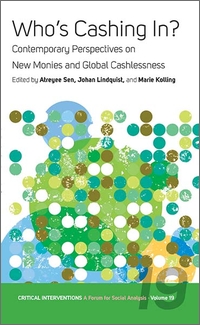 This is the key question discussed in a new anthology, 'Who's Cashing In? Contemporary Perspectives on New Monies and Global Cashlessness’, edited by Atreyee Sen, associate professor at the Department of Anthropology, together with postdoc Marie Kolling from the Danish Institute for International Studies, and Johan Lindquist, professor at Stockholm University.

In all the 12 chapters, the book examines the consequences of cashlessness and new payment technologies on small-scale communities across the world. As the editors emphasise in their introduction, cashlessness hugely affects the informal labour economies of marginalised communities in Salvador, New Delhi, and Copenhagen, while the social and economic lives of well-heeled urban elites in these regions adapt more smoothly to this change.

Six researchers affiliated with the Department of Anthropology or its current research project ’After money, what is debt?’  have contributed to the anthology:

The book is part of the Berghahn series ‘Critical Interventions: A Forum for Social Analysis’, which provokes multiple debates on current issues that have an impact on the everyday lives of populations in diverse regional areas, and introduces readers to information that is not widely available in the media.

Read more about the book on the publisher's website: ‘Who’s Cashing In? Contemporary Perspectives on New Monies and Global Cashlessness’.

Due to research support from the Joint Committee for Nordic research councils in the Humanities and Social Sciences, the Independent Research Fund Denmark, and the University of Copenhagen, this book has free online access.