Resilience unwanted: Between control and cooperation in disaster response 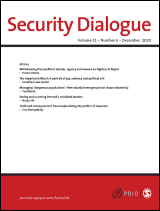 Kristoffer Albris, Assistant Professor at the Department of Anthropology, has contributed to the journal Security Dialogue with the article ‘Resilience unwanted: Between control and cooperation in disaster response’.

The article is co-written with Marco Krüger from the University of Tübingen in Germany.

The article conceptualises resilience as an emergent and contingent practice that shapes societal relationships in unexpected ways. It focuses on the case of the 2013 floods in Dresden, a city that witnessed three major floods within 11 years. Emergent volunteer activities on the ground and on social media played a significant role during the flood emergency response efforts.

Drawing on Philippe Bourbeau’s definition of resilience as a process of patterned adjustment, the article regards these emergent structures as incidents of resilience. In the case of Dresden, not only was resilience not explicitly requested by the state, but it was in several incidents actively not wanted.

While most of the volunteering activities arising from social media platforms intended to support the disaster management authorities, the case shows how subversive forms of resilience were mobilized to resist official plans. They finally urged authorities to adapt to a new social and technological reality in order to render unaffiliated volunteering governable. Resilience thus emerges as an adaptive process that shapes and is shaped by societal relations.

The article thus seeks to add another facet to the debate on resilience by demonstrating how resilience helps us to make sense of complex and interdependent adaptation processes.