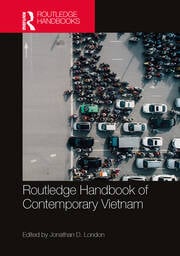 The book offers an authoritative overview of the global scholarship on contemporary Vietnam – rather than on Vietnam as an iconic war zone – across a wide variety of topics, brought together in 38 chapters under the headings Politics and Society, Economy and Society, Social Life and Institutions, and Cultures in Motion.

Tine Gammeltoft contributed the chapter ‘Marriage, Family, and Kinship in Vietnam’ to the part on Social Life and Institutions.

This chapter is about family matters – the ways in which families in Vietnam are imagined and lived. Beginning from an overview of how ‘the Vietnamese family’ has been depicted in popular and scientific accounts, the chapter offers an ethnographic exploration of northern Vietnamese women’s experiences with intimate partner violence and a discussion of the ways in which researchers and organizations have interpreted such violence.

The chapter argues that in order to comprehend the persistent nature of marital abuse in Vietnam, political economies of kinship – particularly the ways in which habituated kinship practices generate domestic dependencies and modes of endurance – must be placed at the center of attention.

Oscar Salemink contributed the chapter ‘Remembrance, Commemoration, and Revolutionary Apparitions‘ to the part on Cultures in Motion.

This chapter takes as point of departure the ritualised commemoration practices on the island of Côn Đảo [Poulo Condore] which was a penitentiary site under the French and South-Vietnamese regimes, infamous for its ‘tiger cage’ cells. The formal commemoration of revolutionary martyrs at the war cemeteries is juxtaposed with the ritualised worship of female martyr Võ Thị Sáu, who in 1952 was executed by the French before she could establish her own family and who resurfaces every night around midnight from her grave at the prison cemetery as a revolutionary apparition.

Focusing on the distinctions and connections between commemoration, remembrance and forgetting, the chapter discusses the phenomenon of war martyrs, sacrifice and commemoration in Vietnam before moving to the distinctions and connections between personal memories and official commemoration. After analysing the meritorious and efficacious dead in the guise of ancestors, spirits, ghosts and gods, paying particular attention to the spirit of Hồ Chí Minh, the conclusion argues that ritualisation of remembrance and commemoration in Vietnam integrates overlapping cosmological worlds and times.

See also the publisher's introduction to the handbook: Routledge Handbook of Contemporary Vietnam