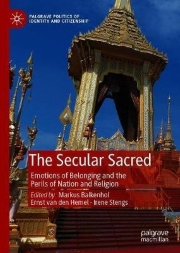 Professor Oscar Salemink has contributed with a chapter to the anthology ‘The Secular Sacred – Emotions of Belonging and the Perils of Nation and Religion’, which explores how religious emotions and national sentiment become entangled across the world.

Salemink’s chapter, ‘Homo Sanctus: Religious Contestations and the Sanctification of Heritage and Human Rights in Vietnam’, draws on over 30 years of research on religious practices in Vietnam.

In the chapter, Salemink notes that religious freedom has been suggested as the historical ‘mother’ of the formulation of human rights. Predicated on individual choice, religious freedom involves an individualisation in terms of confessional interiorisation and secularisation as privatisation of religion, thus making it a secularist proposition, in which religion is defined and circumscribed as a field of action and thinking limited to individual belief or collective religious action in the private realm.

Salemink then shows how spirit possession ritual connected to Mother Goddess worship in Vietnam draws on another authoritative secular repertoire of cultural heritage to make human rights claims, which are set within a ‘sacred canopy’ of a secularist human rights. He argues that the appeal to the ‘secular religions’ of human rights and World Heritage creates a volatile arena of localised and transnational contestations between positions which invariably seek to legitimise their actions with reference to authoritative international regimes that sanctify the this-worldly human subject.

The anthology is published in the Palgrave series ‘Politics of Identity and Citizenship’.

Get access to Oscar Salemink’s chapter: The Secular Sacred – Emotions of Belonging and the Perils of Nation and Religion