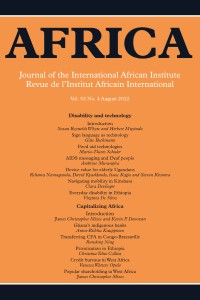 In collaboration with Herbert Muyinda, Professor Susan Reynolds Whyte has edited a special issue of Africa, the Journal of the International African Institute. Whyte and Muyinda contributed the journal Introduction.

The special issue has just appeared after years of work and consists of 6 articles by international scholars, in addition to Whyte and Muyinda's Introduction. The journal is devoted to the study of African societies and culture, and encourages an interdisciplinary approach involving humanities, social sciences, and environmental sciences.

In their Introduction, Whyte and Muyinda explain how this special issue of Africa creates a framework for considering the relations between bodies, technologies, sociality and political economy.

The authors state that the abilities of impaired bodies often are enhanced – more or less successfully – by assistive technologies. Whether these technologies include devices, like crutches, or whether they are less material systems for enabling ‘the disabled’, technologies are meant to augment the functioning of bodies. Assistive technologies must therefore be enacted and embodied as a technique before they become effective in the everyday life of a disabled person.

In addition, the authors explain how it is not only technology but also sociality that is embodied. Sociality itself exists within a context of political economy where livelihoods, inequalities, power, notions of citizenship and ideals of national progress are at play. Whyte and Muyinda state that these social and political consequences and meanings must be considered in exploring disability and technology in Africa and elsewhere.