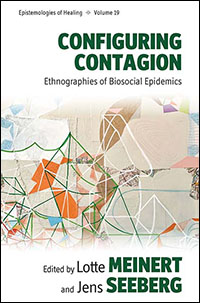 In collaboration with Henry Oboke, Professor Susan Reynolds Whyte has written the chapter ‘Gender configurations and suicide in northern Uganda’, which is included in the book Configuring Contagion: Ethnographies of Biosocial Epidemics, published earlier this year.

The release, edited by Lotte Meinert and Jens Seeberg, aims at expanding the understanding of contagion beyond the typical notions of infection and pandemics by including the concept of biosocial epidemics. All chapters are based on contemporary ethnographic studies from the global north and south.

In their contribution, Susan Whyte and Henry Oboke focus on suicide and its social configuration by looking into gender discrepancies in completed suicides in Uganda.

In northern Uganda, suicide runs in families through affect. Feelings of resentment, betrayal and humiliation take hold within kin relations, embittering hearts and giving rise to the anger that makes people take their own lives. This is an old pattern. What has changed is the gender pattern of suicide. Data assembled between 2014 and 2016 show that gender discrepancies in completed suicides have increased, with far more men than women killing themselves today.

From interviews with bereaved families and people who attempted suicide, together with records kept by village counsellors, the authors gathered accounts of challenged masculinity exacerbated by war, encampment, disease, alcohol and poverty. The decline in formal marriage and increase in children of single mothers might seem to affect women’s security most directly, but men tend to feel these changes heavily.

Changes in gender configurations are related to broader patterns in political economy, and the authors are not arguing for a single cause of the spread of suicide among men. Instead, the chapter examine experience-near accounts in the context of these wider transformations in order to explore how contagious and contaminating affect relates to shifting configurations.

Read more about the book on the publisher, Berghahn’s website: Configuring Contagion: Ethnographies of Biosocial Epidemics