Textures of precarity: Repurposing in a Ugandan refugee settlement 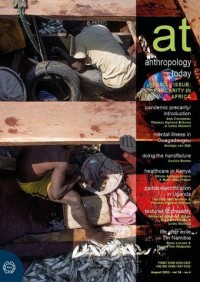 Professor Susan Reynolds Whyte has contributed the article ‘Textures of precarity: Repurposing in a Ugandan refugee settlement’ to a special issue of Anthropology Today titled ‘Precarity in Africa’.

The article, which is written in collaboration with Nicholas Wainman and Lotte Meinert, focuses on the Palabek Refugee Settlement in Northern Uganda that hosts more than 40,000 refugees from South Sudan. In the settlement, the refugees receive plots of land upon which they must build their own houses, as well as a few relief items and minimal food rations.

The authors show that the people who cross the border are not passive recipients of humanitarian aid. On the contrary, they creatively repurpose items often associated with precarity and helplessness in ways that challenge images of refugee victimhood: UNHCR tarpaulins are used in various projects, including video halls and churches. USAID cooking oil tins serve to make house doors that protect, bring privacy and give the owners status.

Overall, the article draws attention to the importance of the creativity and singularity of lived human experience in a specific precarious situation. The authors conclude that in a world where the numbers of displaced persons are increasing, it is essential not only to send relief items but also to recognise the creativity, dignity and humanity of those who have been displaced and crossed borders.

Read the article in Anthropology Today: Textures of precarity: Repurposing in a Ugandan refugee settlement