- Ethnographies of Fear, Protest and the Future

Contributors from the Department of Anthropology, University of Copenhagen:

- Introduction: “Times of Security” by Morten Axel Pedersen and Martin Holbraad
- Chapter 2: “Captured With Their Hands in the Dough": Insecurity, Safety-Seeking and Securitization in El Alto, Bolivia” by Helene Risør
- Chapter 5: “Enduring Presents: Living a Prison Sentence as the Wife of a Detainee in Israel” by >Lotte Buch 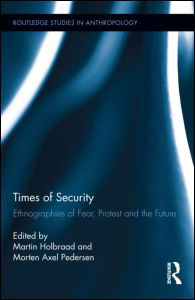 Questions of security
In the current world (dis)order, security is on everyone’s lips. But:

Diverse studies of security practices
This volume brings together a selection of scholars who have conducted ethnographic research in a broad ambit of securitized contexts – from the experience of Palestinian detainees in Israel or forms of popular violence in Bolivia, to efforts to normalize social relations in post-conflict Yugoslavia and ways of imagining threat in left-radical protest movements in Northern Europe.

New paths for security analysis
Interrogating recent debates within and outside the academy concerning the role of "securitization" in contemporary politics, the book paves the way for new security analyses at the crossroads between anthropology and political science via a comparative take on of the temporalities of security in a multi-polar world.

Offering a pioneering synthesis, the book will be of interest not only to anthropologists, but also to students and scholars in political science in general and the field of Security Studies within International Relations in particular

Buy the book at the website of the publisher.

Review
"This edited book is central to the main currents of anthropological work on politics, and to the understanding of discourses of security. It addresses these bodies of literature, uniquely and creatively in the opinion of this reader, through a consideration of anthropological work on time and temporality — another lively and current key theme of much recent anthropology. Times of Security offers compelling ethnographies of security from a range of different geographical contexts, from South America to Europe and the Middle East, and at different scales, ranging from considerations of local contexts to nation states and even the planet in its entirety."