2014 marks the 150th anniversary of the War of 1864 in which the Danish army was defeated by Prussian and Austrian forces. A series of commemorative events are planned, one of the first being a strenuous 80-kilometer “memorial march” from Dannevirke to Dybbøl, completed over two days on February 1-2, 2014. Mads Daugbjerg joined forces with more than six hundred others – most of them current soldiers – to symbolically retrace the 1864 retreat of the Danish army from the defensive earthworks at Dannevirke (now in Germany). Mads was trying to get a sense of participants’ motivations and struggles – and of what it means practically and physically to march “in honour of those who fell on both sides”, as the event was officially branded. In 1864, hard frost and a cruel headwind blizzard made conditions significantly worse than during this year’s hike – not to mention the threat of the pursuing Austrians that were absent this year. Still, the accomplishment felt and shared by the memorial marchers was real enough – even if their pain and suffering was of a more personal, and less nationally devastating, kind.

To see more pictures from Dannevirke go to the facebook profile of the Department. 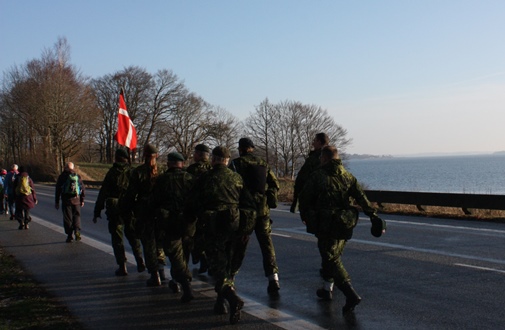